My Middle Child, and Artist's Block 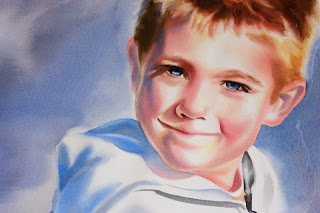 My sweet boy. My middle child.

As different as my children are from one another they all have one thing in common, gigantically pure hearts. But of the three, this boy, has something else too. He has such a huge light inside that he's always, always willing to share with others. He has an almost infinite capacity to love and accept others, even those who are different. Sometimes drastically so.

And, he's always SO happy. Even when he's in trouble .

Which reminds me of something else that he has. An almost infinite capacity for mischief. Maybe that's to help balance out all that pure, tenderhearted sweetness.

Staying away from painting slowly became a habit. One that I'm still working to break.

This painting was a struggle. And I can't really say why, it's a simple, straightforward pose, with beautiful lighting featuring one of my three favorite subjects.

Ok, that's not entirely true. I know that it has something to do (probably a lot more than something) with my lack of painting time. My brushes started to feel like foreign objects in my hand, not the well known companions they had come to be.

And even when I did make myself sit down and paint I found myself just sitting there. Staring off into space, cleaning my palette, organizing my brushes, anything but painting.

It was frustrating. Still is.

When my computer crashed I was teetering on the edge of something that I'm not sure what to call. I was feeling massively burned out and exhausted with painting. It had become a chore, not a passion. And I hated that.

But lately, I'm starting to feel differently. I set the watercolors and paintbrushes aside and pulled out my colored pencils (which for some reason always seem to make me feel better). I'm working on a piece that I've set aside for months, and so far so good.

I'll let you know how it goes. Don't you be worried about me. I'm not giving up. I know this will pass because I ain't no quitter.

Ever felt like this before? What do you to break through the block?