Almost Got It - SOLD 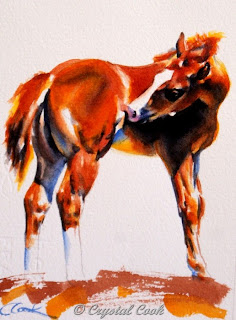 Posted by Crystal Cook at 9:16 AM 8 comments 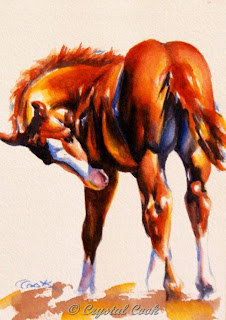 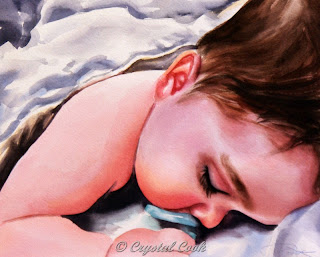 Remember around Valentine's day when I had a contest where I was giving away an 8 x 10 painting to whoever submitted a 'smitten' photo that got the most votes? Well here is the finished painting of sweet baby Xander.

I love his little nose pressed against his binky and his chubby fist. Brings back so many memories to me (although my kids were never into pacifiers, not for lack of trying I tell you!). There is just nothing sweeter than a sleeping baby is there?

An Abundance of WIP's 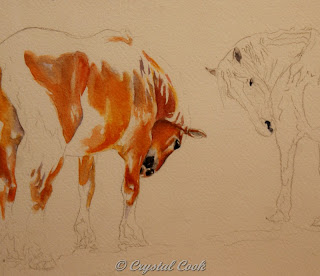 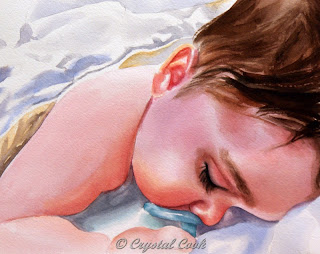 It seems like I have lots of works in progress right now. These two, and a colored pencil piece, and a larger commission too. But those last two are still in the drawing stage.

Do you ever feel like you have so much to do that you just kind of sit there, not knowing where to start? Yeah. That's how I feel today.

At least I am fortified with chocolate. Now I can conquer anything. Huzzah?! ;)
Posted by Crystal Cook at 9:19 AM 20 comments

In the Spring, at the end of the day, you should smell like dirt SOLD 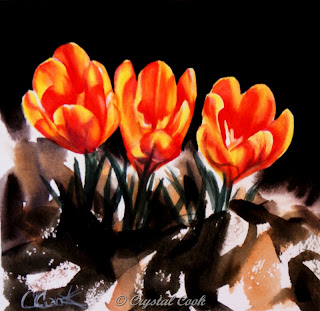 “Spring is the time of plans and projects.”
― Leo Tolstoy, Anna Karenina

Yes, for those of you who are long time blog readers, this is a painting I have posted before. But it's the first day of spring! Which naturally means that here in Utah it is a dreary, rainy day. :) And so I've spent the morning inside, with my youngest, making pretend food to feed to all of his stuffed animals. It's been perfect. 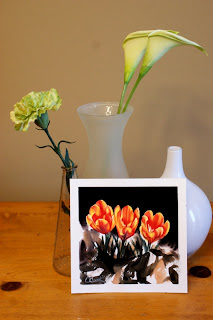 Although if I'm being honest I'll have to confess that I wish it were just a tad warmer and sunnier. Like last week, when we took a trip to the park for the first time this year. 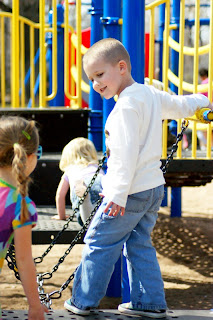 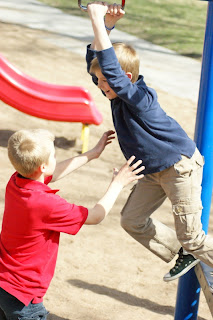 So my friends, what are you most excited about now that spring is here? (At least according to the calendar here in the US)
Posted by Crystal Cook at 11:25 AM 8 comments 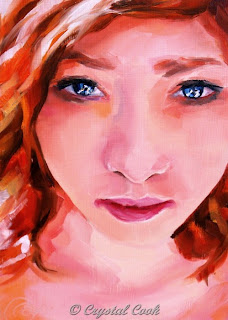 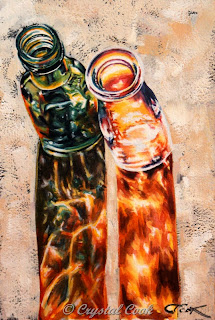 Call It A Day 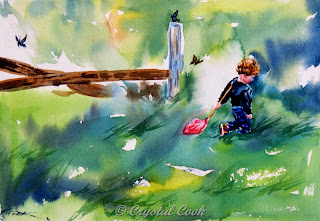 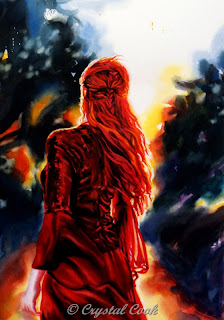 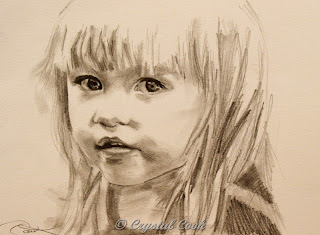 'Almost a Smile'
7 x 9 inches
graphite on paper - not for sale
This is a beautiful little girl that lives in my neighborhood. Last fall I started asking some fellow moms I knew to see if there were any willing models nearby. And I had a pretty big response which made me SO happy! Then the holidays came and well, I am just now getting around to working on the photos I took of this darling little girl.

When I ask someone to model for me I give them the option of either me paying them for their time, or giving them a sketch. Her mother chose the sketch. I want my models to know how much I appreciate their time, so I always try to compensate them in some way.

Except for my children and my nieces and nephew who are exempt from this rule. They work for free, and occasionally cupcakes! :)))) Mwa ha ha!!!

With this sketch I wanted the emphasis to clearly be on her eyes, so that's where I kept my darkest values and the most detail too. I am really happy with how it turned out. But let's face it, having such a beautiful model makes my job pretty easy right? Happy weekend everyone!
Posted by Crystal Cook at 9:23 AM 14 comments

A bigger work in progress 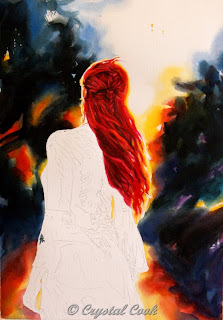 So. I felt like it was about time I did a bigger painting. There is just nothing like big splashy watercolor backgrounds. So much fun. The background and her hair are finished, just the rest of her figure needs work. When I started this painting I masked off the entire figure (after I had painted her hair) with a combination of frisket film (for the majority of her figure) and masking fluid to seal the edges. It looked like this: 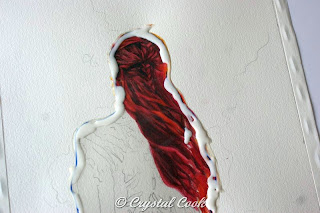 It ended up working really well. There's just that one spot on her arm that leaked, but that's a dark area anyway so it won't matter. Which is a good thing because I used a ton of pthalo blue in the background, which if you're an artist you know NEVER COMES OUT OF ANYTHING. I've ruined quite a few shirts by splashing pthalo around indiscriminately.

I had originally planned to pour the background on this painting. But after giving that a try on another painting that I did for a fundraiser with my son's class, I decided not to. I really don't care for pouring. I think it gives the most beautiful and luminous results, but I don't have the patience for it. Maybe one day I'll give it a try again.

Speaking of my son's class fundraiser I just remembered I never showed you guys the finished painting! Here it is, they did a really great job I think. :) 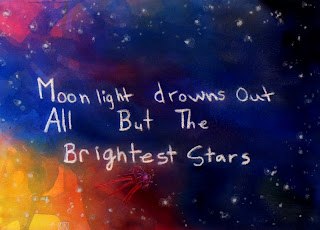 The finished painting! I had three of the girls write the quote with a wax resist crayon and then each kid got to pour several cups of paint onto the painting. There were about 65-70 kids and each one of them got a chance to build up this painting. It was really cool. The stars are colored pencil drawn on once the painting dried. But the letters are entirely wax resist. It worked out pretty awesome I think. Considering all the paint that got poured onto it. 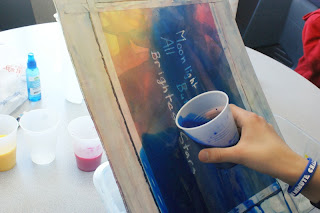 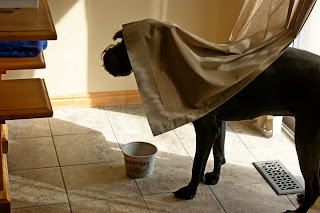 A Kiss On The Nose - sold 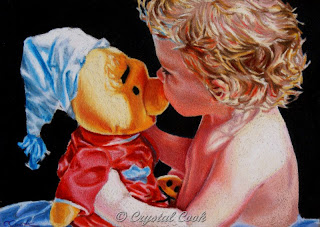 'A Kiss On The Nose'
5 x 7 inches SOLD
colored pencil on Ampersand Pastelbord
I hope you'll excuse this post that is all about the feelings of my heart right now.
Lately I have been overwhelmed with melancholy when I think of all my kids growing up. I know I shouldn't. That's my job as a parent right? To prepare them to leave home and live happy, successful lives as good men. Of course I love them no matter what stage of life they are in. But there's something so very precious about these early years when our bond is so strong and we are each others whole world.
So, the only way I know how to express those feelings is through art. I've spent a lot of time looking through photos and shedding a few tears at the years that are gone. I don't know how to not feel this way. I love being their mom so much. I love how close we are. I hope things always stay this way. But I know things always change. At least a little bit.
All I can do is love the moment, the season, that we're in and try to remember every single detail. And not mourn it's passing when little hands grow big. :)
"This curious fact of life: that when parents are old and their children grown up, the grown-up children are not the persons they formerly were; that their former selves have wandered away, never to return again, save in dream-glimpses of their young forms that tarry a moment and gladden the eye, then vanish and break the heart."  - Mark Twain 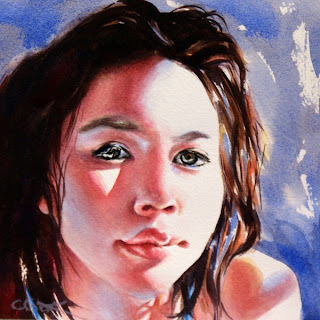