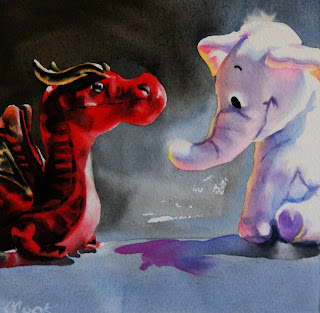 I had to paint the Heffalump again*. He's starting to act a little diva-ish, demanding that I paint him. Even when I told him I was going to put him in a face off with this fierce dragon, he still wanted to pose.

I don't think he realized what he was in for. I mean look at that face! So clueless, so trusting. Poor little guy.

But I must admit that I underestimated this little Heffalump. In a classic case of the victorious underdog, he defeated the dragon. Killed him with kindness I guess you could say. Well not really killed since the dragon did live to see another day, but a defeat just the same!

They seemed to reach an agreement without having to exchange blows (phew! I did not want to explain to my son why his Heffalump was suddenly sporting a black eye. . . or worse). Heffalump said he would not give Dragon that cute look anymore as long as Dragon promised to end his evil-attempted-maiden-eating days and use his mighty powers for good instead.

* A few side notes about this painting:

1. I am a sucker for dragons (expect to see a little more of this guy).

2. I am also a sucker for a good vs. evil story. Especially when the evil one decides to fight his dragonish (vampir-ish, Severus Snape-ish, zombie-ish, etc.) ways and chooses to be good.

3. I've been struggling with feelings of inadequacy with my paintings lately. It seems like everything I touch just doesn't measure up! *Sigh* Frustrating and demoralizing is what it is. I thought a fun little painting might help with that. :) I know this will pass, it always does. Nevah give up! Huzzah!

Have a great loooong weekend everyone. :D