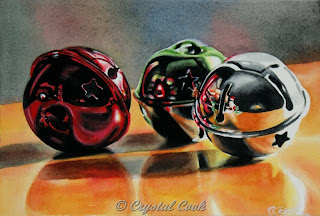 'Sleigh Bells Ring' SOLD
5" x 7" watercolor
click here to bid
I remember sitting in the elementary school's library, when I was about seven years old, in this little circular seating area, and listening to the librarian read 'The Polar Express' by Chris Van Allsburg for the first time. I was captivated. I don't think I moved during that entire story time.
I LOVED that book. I loved the whole idea of being taken to the North Pole on Christmas Eve on the Polar Express, listening to the wolves howl outside the train, tasting the rich, hot chocolate on the ride up there, and of course the chance of being chosen by Santa to receive the first gift of Christmas.
And the thing I think I wanted for Christmas the most that year was one sleigh bell. A real one from Santa's sleigh, preferrably from Dasher's own harness (who was my favorite reindeer).
On Christmas morning I was thrilled to see that one small present under the tree that I knew had to be a jingle bell from Santa's sleigh. When I opened it and saw the small silver bell inside, and held it to my ear to hear it's soft jingle, I knew that Santa had come through for me. Christmas was magic.
And now that I'm grown up and I get to see Christmas through my boys' eyes it still is. More so now than it ever was. :)
P.S. I think I am developing alarming magpie-like tendencies as I hunt down every shiny and reflective object I can find just so I can paint them. I feel like that dog from 'Up' who kept shouting 'Squirrel!' only instead of squirrel it's 'Shiny!'  :)
See you later friends. Huzzah!!
Posted by Crystal Cook at 8:16 AM