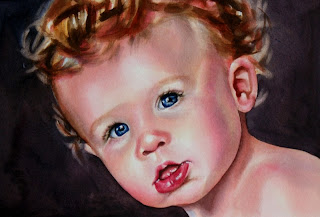 Ephemeral
7" x 9" watercolor
A few weeks ago it was my baby's birthday. He turned three years old. On that day he and I stayed home, just the two of us (now that the older boys are in school all day), and played with all his new toys. And it was the sweetest day I've had in a long time.
We made a Play-doh lunch and had a Play-doh picnic with his stuffed animals in his new little indoor tent (which was a rather tight fit for me).
We played Spiderman vs. the Green Goblin and Iron Man vs. Dr. Doom (for some reason I was always the villain. He he he).
We played a real, live version of angry birds, stacking towers of blocks and pigs so we could launch little birds at them and knock 'em down.
We made birthday cupcakes and licked the beaters.
We had fun in small and simple things. :)
And later that night, before I tucked him into bed, I held him close and closed my eyes and remembered that three years ago at this exact time I was doing the same thing with a much smaller little boy.
Posted by Crystal Cook at 6:40 AM