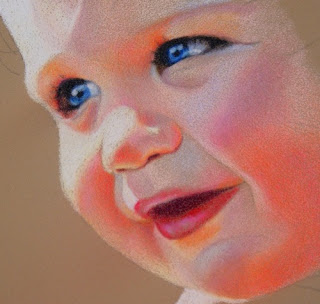 Untitiled colored pencil on pastelbord work in progress (detail)
Way back earlier this year when my computer got sick and had to be rushed to an electronic medic I took some time to experiment with my colored pencils.
I'd been hearing good things about using colored pencils on pastelbord (which is basically a sanded surface mounted on hard board), mainly that:
1. it's faster because of the sanded surface there is no need to layer color super lightly (which takes hours)
2. colors appear brighter and more intense on pastelbord than on traditional paper
3. there is a possibility of framing a piece painted* on pastelbord without glass.
Which meant of course that I had to rush to my local art supply store (Ogden Blue FTW!) and stock up.
I came home SO excited I could hardly stand it! And as soon as I had some free time I laid out all my lovely pencils and got to work.
And here's what I found: Numbers 1-2 were dead on.
It was faster! Because the tooth of the sanded paper is able to hold much more color, much more quickly there is no need for laborious layer upon layer of colored pencil! Of course there is still some layering involved, but not nearly as much because the tooth of the surface fills up pretty quickly. Which means that you must be decisive and accurate about what colors you will layer early on.
So, basically I'm in love with colored pencil work on pastelbord. It is a beautiful thing. :)
Huzzah! See you next week everyone!
*colored pencil work, when done in a way that the entire surface is covered with pencil is often called 'painting' even though there is no paint or brushes involved.
P.S. I don't think I've taken the time lately to let all you guys know how much it means to me that you read my posts, look at my work, tell others about it, and say some very nice things to me and about me. Thank you, my friends, so much for your support and kindness, you rock in an all out glorious way. :))))
Posted by Crystal Cook at 9:23 AM