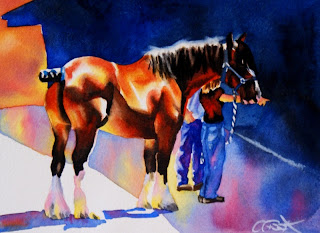 A few years ago I saw this massive Clydesdale at a horse show and just stopped and stared at her for a while. She was dozing while her owner and another person talked and gestured around her. I even saw a toddler in a trike zooming around her feet (!!!). She didn't move a muscle. Truly a gentle giant.

The horse person in me was drawn to her beauty, power, and kind disposition.

The artist in me was drawn to that fantastic sunlight and dramatic light and shadows. Huzzah!

I've had this photo hanging around for about six years, just waiting for me to paint it. It's from an ancient film camera too. Sometimes I'd pull it out and look at it and want to paint it so much. But I was scared.

It wasn't a really clear shot, and it was kind of dark. And I wanted to paint it BIG so that ginormous horse would have lots of presence and drama, but wasn't quite sure I'd be able to pull it off.

Then last week I decided to give it a try as a small piece. I intended to just paint a study of the horse and leave the background white. But then I thought the figures made a nice story and added interest.

After the horse was painted I felt a flash of bravery (or possibly recklessness, depending on the outcome), so I splashed some bright colors around to make some background shapes for the barn and shadows. And really liked the result. :)

Now that I've done this small painting I think I have the courage to paint this baby BIG! Isn't it funny how sometimes fears that we have, usually of failure, have such a powerful effect on what we do or do not do?