Sketchbook Tuesday, something a little different this time 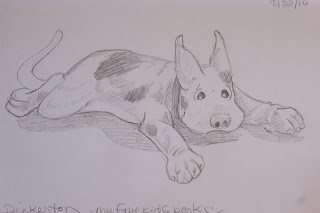 my sketch of Steven Kellogg's 'Pinkerton'
When me and my sister were little, every year on our birthday my mom would hang up a big banner she made for us. It said "Happy Birthday" of course, and then all around the letters were drawings she had done of our favorite things. Mine had lots of horses on it, and puppies, and I think even Rainbo Brite or Care Bears, or whatever my favorite books or movies were at the time.
A few years ago she started the tradition again with her grandkids (my mom is really awesome at drawing, but she thinks she's not, can you believe that?). Now each of my boys have a birthday banner of their own, and every year we add whatever new thing they're into right now.
My youngest son turned two this week, so on Sunday I pulled out his banner and started adding to it. I ended up looking through a bunch of my kids favorite picture books for a long time. I was sucked into the memory of reading them their favorite bedtime story over and over again.

It's funny how you always think things will stay the same, that nothing will change, while at the same time knowing in your heart, even if you don't want to acknowledge it, that they won't.

Anyway, I found this book that was a collection of Steven Kellogg's best children's stories. I love his books. When I was little I could look at his illustrations for hours, noticing every little detail. His books about Pinkerton ended up being some of my oldest boy's favorites too. I think it's because we just so happened to have a giant dog that is an awful lot like Pinkerton. Seriously. But we love him.

I took a few minutes and drew this little sketch. It's not my original creation, but it was fun. And the whole time I drew it I kept thinking about my oldest boy, who's just eight years old, and how much he loved Pinkerton.

Sometimes I think it's okay to slow down and create whatever it is that moves you. Even if it's not your own, even if some people think it's silly, even if it serves no purpose whatsoever other than reminding you that life is good.
Posted by Crystal Cook at 12:53 PM