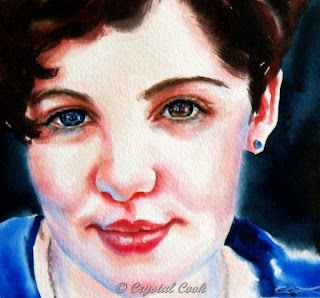 “I choose gentleness... Nothing is won by force. I choose to be gentle. If I raise my voice may it be only in praise. If I clench my fist, may it be only in prayer. If I make a demand, may it be only of myself.”
― Max Lucado
This woman's eyes have always drawn me in with their gentleness and grace. And the tentative curve of her smile too. An older painting from the archives that I painted last year, but one of my own personal favorites.
Yesterday while out running, I was trying to cross at a crosswalk, and the driver turning right wasn't paying attention to pedestrians. I was watching her and I saw that she was not paying attention to me, or else I probably would have been hit. I got angry. I smacked her trunk as she drove away with my fist. The thing that made me so angry was that the crosswalk I was at was right in front of an elementary school, even though it was too early in the morning for any kids to be there yet. All I could think of was what if a smaller child had been there?  A little one who trusted the cars to look out for them? What if it had been my child who had almost gotten hit, or worse, by this driver who was too busy to look around them?

My point is that yesterday I was not gentle. I vented all about it on Facebook. And I kind of regret it. Although, hopefully my fist pounding her trunk woke that driver up enough that she'll never speed through another crosswalk again. So the little ones who cross there will always be safe.
Life is precious, and short. We don't need to make it any shorter for anyone by not paying attention, or choosing not to be gentle.
Until. . . later my friends. I'm off to eat some cookie dough for a mid morning snack.