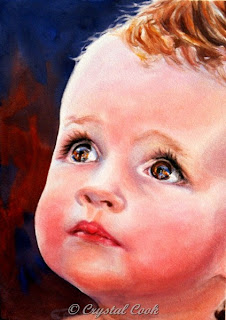 'All Things New'
5" x 7" watercolor on Ampersand Aquabord
$100 plus $7 US shipping
I've spent a lot of time lately going through my stash of photos and organizing them (Ha! no really, I'm trying), looking for that one image that shouts at me to paint. I found some of my youngest son when he was a baby, and then some I had taken of him just a few months ago and I was shocked to see the change in him. He is so grown up now (that's not him in the painting above just in case you're wondering). Makes me a little sad. He's my baby, my last, and it's hard to see him grow up so much right before my eyes, although the new changes are fun too of course.
Then I found these photos I took of my darling nephew over the summer. He was about a year and a half old, and he had that look of wonder at everything he saw around him. And his beautiful brown eyes are what called me to paint him. I have a few other shots of him I will be painting too. He was such a great little model. :)
Now about this aquabord. I've been wanting to paint with my techniques in watercolor on a surface that won't need framing behind glass, and also bigger. I envision a certain wall in my home with three 24" x 24" portraits of my boys, on cradled aquabord with out glass or frames. So, here I am trying aquabord again.
And I liked it a lot better this time. I think I'm getting the hang of how this stuff works. And the best part is that the finished painting still feels like 'me'. Where as when I paint with acrylics or oils it feels like I'm trying somebody else's clothes on that don't fit quite right. I enjoy oils and acrylics for a change of pace, but they don't feel like me. At least, not yet. Maybe one day I'll feel differently.
One tip I found useful for using aquabord is to use a very wet brush with mostly water and not a lot of pigment, and gradually build up color that way. Which actually is how I paint with watercolor on paper too. :)
Until Thrusday! Huzzah!
Posted by Crystal Cook at 9:14 AM